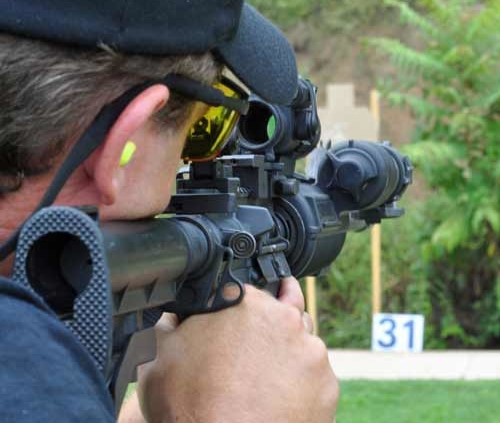 No doubt, each family has their own individual challenges when it comes to defending the homestead. There are dozens if not hundreds of variables to consider. For many, an AR platform, semi-auto rifle may be a very good choice. It’s not at all absurd to suggest this, and an honest review of the features and benefits may lead you to keep one at the ready.

In a future article, I’ll review some basic considerations when it comes to firearms as part of a home defense plan. For now, let’s assume an AR-15 – or similar design – is on your list for consideration.

The AR platform is comfortable and adjustable 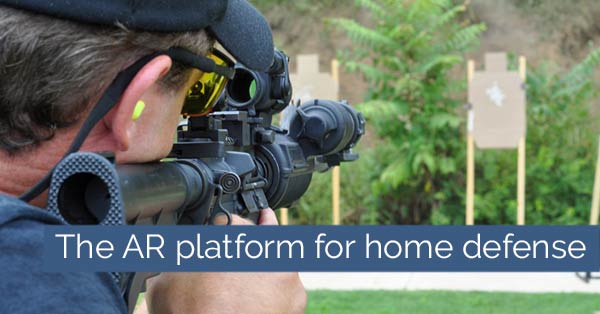 With no doubt, comfort and fit – for anything we may use or wear – is everything. Be it a scuba diving mask or a pistol, if it does not fit, it’s not going to work. That SIG Sauer® P320 with the large grip module may work well for you, but it may be too big and uncomfortable for your 13-year-old daughter.

Shooting a gun that is not comfortable will result in one of two paths. The shooter’s performance will sub-standard, and/or they may loose interest in the activity and no longer want to visit the range. Neither is acceptable.

By design, the AR platform is modular and adjustable. It’s modular to meet specific requirements, and adjustable so it can fit both you and your 13-year-old daughter. An adjustable-length stock – for those of you in non-restrictive states – is convenient when multiple shooters will be using the gun. The adjustably simply allows for the rifle to “fit” a variety of body types and shooting styles.

The rifle is also comfortable to hold and shoot. For many, holding the AR in a firing position is natural, and the recoil is very manageable. Speaking of shoot-ability, it’s been my experience that novice shooters, and shooters who are not regularly active, are consistently more accurate with their first and follow up shots as compared to a defense-caliber shotgun or pistol. This is critically important.

When shooting from 5 to 7 yards, novice shooters with no training other than a detailed safety review, will frequently shoot a scattered pattern on a USPSA target when shooting a 9mm pistol. Put a .223 AR-15 in their arms, they’ll find that red dot and consistently place 10 rounds in the center of the A zone. For the next 10 rounds, they’re shooting A zone head shots.

Obviously, with some instruction on proper sight alignment and trigger control, these shooters will soon be able to place 10 rounds in the A zone with a pistol. It’s just that right out of the gate, they will be more accurate and consistent when shooting the rifle. I’m convinced this is an important consideration when it comes to home defense. With no doubt, you want every advantage when it comes to making accurate hits on a target. Take the advantage.

A self-defense rifle round is appropriate in the home

The .223/5.56 self-defense round is appropriate for use within a home, even in an urban environment.

Ballistic experts have found rounds from these calibers “dump energy” quickly and break apart or begin to tumble after penetrating the first barrier.

As a result of renewed law enforcement interest in the .223 round and in the newer weapons systems developed around it, the FBI recently subjected several various .223 caliber projectiles to 13 different ballistic tests and compared their performance to that of SMG-fired hollow point pistol bullets in 9mm, 10mm, and .40 S&W calibers.

Bottom Line: In every test, with the exception of soft body armor, which none of the SMG fired rounds defeated, the .223 penetrated less on average than any of the pistol bullets.

From Real World .223 Testing, by the Gunsite Training Center Staff.

The 55 grain HP .223 has less penetration than any of the other ammunition tested. Based on the results of this testing, there appears to be no basis for concern regarding the over penetration of the .223 [HP] round. In fact, it seems even safer in this regard than .40 S&W handgun ammunition.

A rifle round is more effective when stopping a threat

When shooting any firearm in a self-defense situation, we need to be accurate. As mentioned above, novice shooters are more accurate with first and follow-up shots using the AR platform. Being more accurate increases your effectiveness when it comes to stopping a threat.

Of course the round and its velocity is important when it comes to stopping a threat. When it comes to modern self-defense ammunition, the .223 round does very well as compared to modern pistol calibers.

The AR platform generally has a higher capacity as compared to a pistol or shotgun. In a self-defense situation, you want to avoid manipulating the weapon at all except for pulling the trigger straight back. Law enforcement and civilians do not favor high-capacity magazines so they can shoot more rounds at a threat, they favor them so they can manipulate their weapon less while having enough capacity to stop that threat.

As mentioned at the start, your individual situation may lead to a different conclusion when it comes to a home defense firearm. For many the comfort, adjustability, accuracy, round penetration, magazine capacity and stopping power may indicate the AR platform is an excellent choice for home defense.

This article is certainly not an all-inclusive list of AR platform advantages. You may have some of your own, and you may want to reference some disadvantages. Chime in within the comments or on Facebook.

A version of this article was original posted on Radio Vice Online.