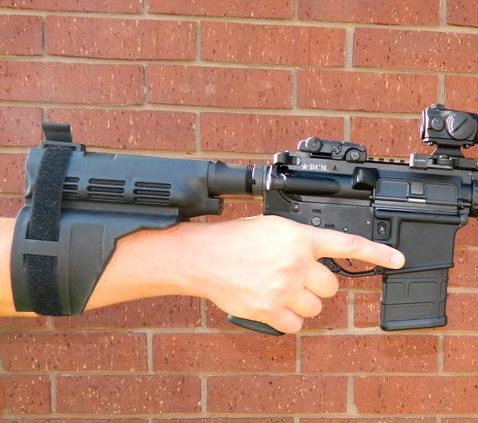 Seller’s remorse is something most firearms enthusiasts suffer from on occasion. Such was the case with my SIG SAUER® P556. For those unfamiliar, the P556 is a pistol version of Sig’s 556 model semi-automatic gas piston rifle chambered in 5.56 mm. The design lends itself well to a Short-Barreled Rifle (SBR) conversion.

That was the intent of this purchase. Under federal law, a rifle is a shoulder-fired firearm with a barrel of at least 16 inches and an overall length of at least 26 inches. Any rifle with a shorter barrel or overall length is an SBR and is subject to the restrictions of the NationalFirearms Act. I was excited about the project and was perfectly willing to pay my tax and wait for the proper paperwork to be filed.

However, between the mandatory frame engraving, optional legal trust, $200 tax stamp, the criminal legalities of “Constructive Possession,” and all the other legal nuances, I began to get worried. Still, only one of the regulations was truly scary. It’s a federal offense to take an SBR out of its registered state without filling out paperwork and waiting for approval. I was concerned what might befall my wife or daughter if something happened to me and they decided to move out of state without fully understanding the legal requirements.

I couldn’t stand the thought of my girls being held legally responsible for my choices. Granted, the P556 is a fun pistol to shoot, but my primary intention for its purchase was to convert it to an SBR for SWAT and patrol use. The gun did not fit into department policy as a rifle or a pistol in its factory form. With no practical reason to keep it, I sold it and continued to use the more traditional M-4 size rifle with a 14.5-inch barrel (plus flash hider which brings the barrel length to just over 16 inches) at work.

In 2013, Sig somewhat quietly introduced the SB-15 Pistol Stabilizing Arm Brace. It was designed by Alex Bosco of SB Tactical, a veteran of Operations Enduring Freedom and Iraqi Freedom, to help people with limited mobility enjoy the AR-15 pistol platform. It should be noted that Sig donates $3.00 for every brace sold to Honored America Veterans Afield (HAVA).

This brace slides onto the buffer tube of a traditional AR-15 style pistol and then wraps around the shooter’s forearm which allows him or her to hold the pistol more steadily.

The Bureau of Alcohol, Tobacco and Firearms (ATF) had ruled in November of 2012 that installing the SB-15 on a pistol does not violate any laws, in itself. Sig sent out documentation of this ruling with each SB-15 it sells. After Sig Sauer put this handy device into large scale production, the shooting public was quick to notice that the arm brace could be used to shoulder fire an AR-15 style pistol.

It wasn’t intended for that use, but the potential was pretty obvious. A lot of us held our breath and our dollars at that point waiting for the other shoe to drop. In March of 2014, the ATF responded to a direct inquiry asking if shouldering a pistol with the SB-15 brace would re-classify it as an SBR. The now highly-circulated letter states firing a pistol from the shoulder does not change its intended purpose and is, therefore, legal. I began to regret liquidating my P556.

Shortly after that, some law enforcement agencies approved the use of AR-15 style pistols for duty use as long as it was equipped with an approved arm brace like the SB-15, and the officer could successfully pass the carbine qualification course with it. I considered buying an AR pistol and adding the arm brace. I even bought most of the necessary parts. 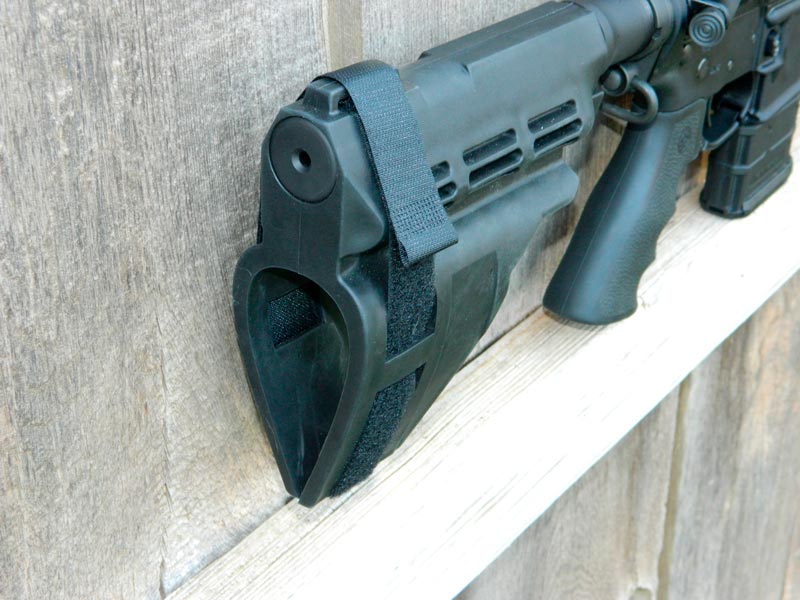 On January 16, 2015 just a few days before SHOT Show, the ATF released yet another letter which can be found on the BATF website. That letter seems to very clearly prohibit the use of the SB-15 as a shoulder stock and is obviously contrary to at least two previously released letters. The letter was clear in that contradiction when stating, “Any individual letters stating otherwise are contrary to the plain language of the NFA, misapply Federal law, and are hereby revoked.”

Obviously, the whole thing is confusing. How does the law change two or three times without legislative intervention? Well, it didn’t. It’s just that the agency in charge of interpretation misled the firearms owning public at least once or twice. The problem is now: we don’t know which one to believe.

I stopped by the BATF booth at SHOT Show 2015 to inquire further. We first spoke to an agent who quickly punted us to another agent who, in turn, booted us to one of their attorneys. It was the opinion of the attorney that merely installing a brace on a pistol, thereby allowing it to be shouldered, made it a short barrel rifle and subjected it to NFA controls.

That information was even more restrictive than what the letter indicated. He directed me to, “read the letter” which I told him I had just done 24 hours prior. One of the agents was quick to point out that there were several letters sent out by BATF and not just the three I was aware of. What?  I asked the attorney if shouldering just the buffer tube would have the same legal effect. He said he didn’t want to, “get too far afield” in our conversation and added that his agency was not in the business of hurting innocent people or law enforcement officers.

To paraphrase, there was a mistake on their part and they were just trying to clear it up. I asked if all of those who had taken part in Internet videos shouldering AR pistols with SB-15’s had committed prosecutable offenses. He again said BATF was partially culpable for this confusion and that he, personally, did not see the need to begin prosecutions. The attorney added, though, as the letter becomes common knowledge, that possibility could become more of a reality. At this point, my friend began tugging at my shirt as an indicator that the conversation had run its course. I left more confused than I had arrived.

To be fair, it was obvious on that first morning of the show, people had been throwing rocks at those poor folks at the BATF booth. We found them both professional and gracious. We thanked them for their time.

On March 21, 2017, the BATF seems to have, once again, reversed their opinion. This letter seems to state that the addition and use of an arm brace is perfectly lawful. I think I’ll be waiting for some sort of legislative action before I break out the credit card. I’m not sure how this situation could ever be un-clustered without clear language from the legislature.

Sometime you have to tell Tactical Ted to take a hike – the story of...