A fear of firearms keeps a lot of potentially great shooters off the range and away from firearms ownership.

“I’m afraid.” It’s rare for a firearms instructor to hear those words, but it’s common for people to have a very real phobia of firearms. This lady was different in that she had little fear of embarrassment. She just wanted to conquer her phobia. I’ve learned from much better instructors than myself to, “read the room” of students. This particular group was made up entirely of new shooters. Most had never fired a gun before. These are not the most challenging students. The most challenging students are those whose pride prevent them from asking for help. Again, this lady was different.

After the classroom portion, but before we took the first live-fire shot on the square range, I asked if there was anyone having comfort issues. She again said, “I’m afraid” in no uncertain terms. She was afraid to take that first shot, but she certainly wasn’t afraid to get her money’s worth out of her instructor. It made me think about all of those people out there who didn’t have that extra ounce of courage it takes to verbalize their trepidation. It really made me think about all of those good folks out there who never even come to a class of any kind because of that fear. This particular lady’s fear faded quickly and, toward the end of our shooting session, had landed squarely in her comfort zone. I was literally chasing her from the loading station to the firing line. Fear had become excitement for her. Still, there are a lot of folks out there who will never show up to a class without a nudge.

My training company recently developed a program entitled simply, “Introduction to Handguns.” We provide it for free to the public and its intended goal is to provide the knowledge and confidence for new or prospective gun owners to actually take the handgun license class. We usually hold it the evening before a handgun license class. “Intro” is all classroom with no threat of live-fire embarrassment. We start at zero and cover the basic safety rules, range etiquette and handgun nomenclature. At the end of the presentation, students are encouraged to handle simulated and real handguns, depending on their comfort level, under supervision. Most of those students go on to take the license class, though some others make the informed decision that they are not comfortable owning or shooting a firearm. There’s certainly nothing wrong with that and we don’t try to sway folks either way.

That’s the first step in 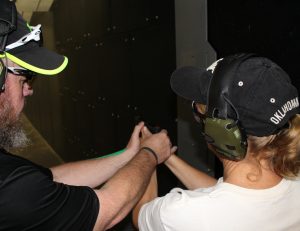 this process:  ensuring the student really wants to be a gun owner. It’s certainly not for everyone. The next step is creating an environment of trust. I acknowledge to the class that my greatest personal phobia is public speaking. That is intended to build a bond with the student, but usually one of the attendees provides me with encouragement saying something like, “you’re good at it now.” That proves another point to the class. The instructor and other students want to see each other do well. That knowledge enhances everyone’s comfort level. On a side note, avoid using the word, “fear.” When referring to the phobic student, use more innocuous words like, “trepidation” or “hesitation.”

There are a few things we can do for the students we actually get to a live-fire class. People tend to fear the unknown. A lot of non-shooters have no idea how firearms actually function. We use inert training guns in the classroom to simulate recoil for familiarization. After we get a grasp on the seven fundamentals, I have each student come up individually and I actually push back on the “muzzle’ of the training aid to show them how little the gun will actually affect them physically and to help with the fundamentals of shooting. I learned this teaching technique from our own Jerry Jones. This exercise gives the student a chance to perfect their fundamentals and also let them begin to overcome their fear of recoil before ever firing a round.

On a related note, a lot of trepidation (see?) comes from muzzle blast.

Muzzle blast is the primary cause of “flinching” in the novice shooter which is, of course, detrimental to proper follow through. I encourage students to use both ear plugs and muffs. That simple combination seems to make a great difference for the new shooter. Of course, that means the instructor must work a little harder to make certain that range instructions are heard and understood.

Depending on the class,  I often shoot a few rounds when we first hit the range just to take away the mystery. Then, we review the four safety rules once again. The students shoot one at a time until everyone is comfortable. By the time we are ready for the state-mandated qualifications, the formerly phobic students invariably exhibit a bit of  swagger walking back to the line after loading their magazine. I never fail to make that observation out loud and express my pride in their accomplishment.

Now, this may seem like small stuff, but a nice certificate can mean a lot to a student attending their first shooting school. I recognize them each by name as I present it to them. It might be a basic class to some, but to others it took courage to even show up and is a milestone in their lives which deserves a proper footnote. Remember, one of our long-term goals as instructors is to encourage continuing education. The better their experience, the more likely they are to seek out future classes.

There are many specific other techniques which may help the phobic student become a shooter, but it really all comes down to The Golden Rule. Most importantly, be prepared to put in the work. It’s amazing what people are capable of accomplishing when someone just shows them that they that they can.