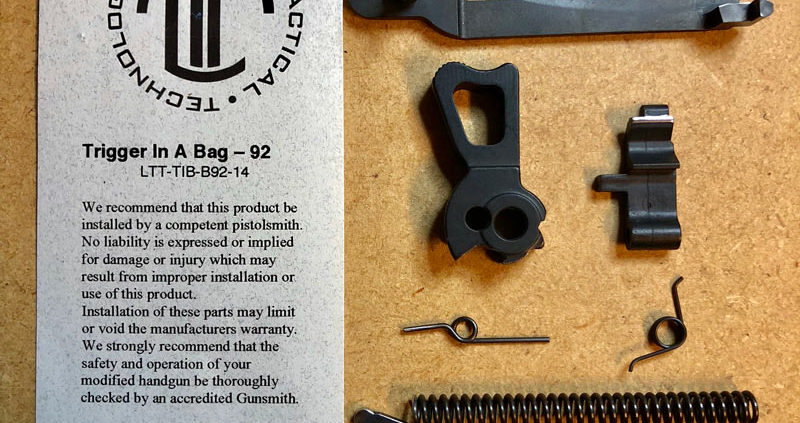 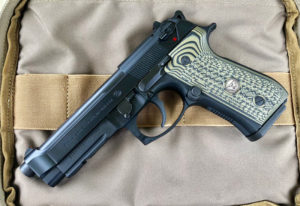 As a child growing up during the 80s, it’s no surprise my first “gun crush” (and likely MANY others like myself) was a Beretta 92. Martin Riggs and John McClane did for Berettas what “Dirty Harry” Callahan did for S&W Model 29s. It wasn’t until relatively recently that I finally picked up one. Now, there are three in my safe. They seem to multiply.

My first Beretta was a 92G. Anyone will tell you, once you go “G”, you never go back. For those of your not familiar, on “G” models the safety lever acts only as a decocker. When my father passed away, I inherited his M9A1. It was completely stock and I intended to leave it that way.

After a while the thumb safety started bugging me, so I order the “G” conversion kit. While I was at it, I figured I’d drop in the seemingly-mandatory “D” spring as the factory trigger pull, well… stunk. And while I was at it, might as well bling it up with some Wilson Combat grips, steel guide rod.

So much for keep it stock!

About this time Ernest “Ernie” Langdon with Langdon Tactical Technologies came out with his Trigger Job In A Bag. Touted as equivalent to 90 percent of his custom gunsmith work, it had my attention. When it comes to gunsmithing, Ernie is to Berettas what Bruce Gray is to SIGs. For $165, it was almost a no-brainer decision. 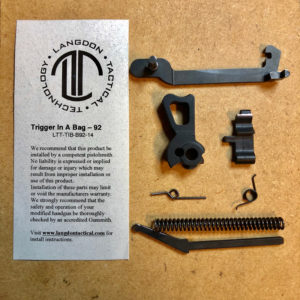 I’ll be honest, before the kit showed up, the extend of my gunsmithing skills had been installing Apex Tactical trigger kits into M&Ps and the occasional deep Glock cleaning. I was a little… anxious, you might say about taking the Beretta all the way apart. However, watching Ernie’s YouTube installation video and one or two others made installation a breeze. I’d venture to say that Berettas are one of the easier pistols out there to work on. Start to finish, installation took me about 45 minutes – and that was including multiple rewinds of the videos.

Single Action: between 3.5 and 4 pounds.

I decided to go with the 12 pound mainspring since shoot the pistol in IDPA. (It’s been stated that you can potentially run into primer ignition issues if you go below 12 pounds.)

The double action pull came in at 6.8 pounds, and single action was exactly 3.5 pounds. This was down from the factory pulls of 11.3 pounds and 6.6 pounds, respectively. There was zero, and I do mean zero, stacking in double action mode. To say it was smooth would be an understatement. The single action pull with crisp and clean, with no over-travel.

One thing I didn’t mention was that my 92G was worked on by another well-known Beretta gunsmith, and I’ve shot a few “slicked up” ones as well. I’m here to tell you, LTT’s “Trigger Job In a Bag” is literally a close as you can get to a custom trigger job, without having to ship your pistol off. Yes, it’s that good!

On top of that, it’s probably the best value for a trigger job out there. Just to give you an idea of what an insane deal this is, the parts and springs alone come to almost $130. So for an extra $35, you’re getting professionally polished parts from the leading expert out there on Berettas. I’ll take that every day of the week and twice on Sundays!

Just like Apex triggers kits are “must haves” for my M&Ps, Langdon Tactical’s “TJIAB” is now a “must have” for any future Beretta. If you own a Beretta, you really owe it to yourself to pick one of these up. Trust me, you won’t sorry.

The AR-15 platform is a reasonable choice for home defense