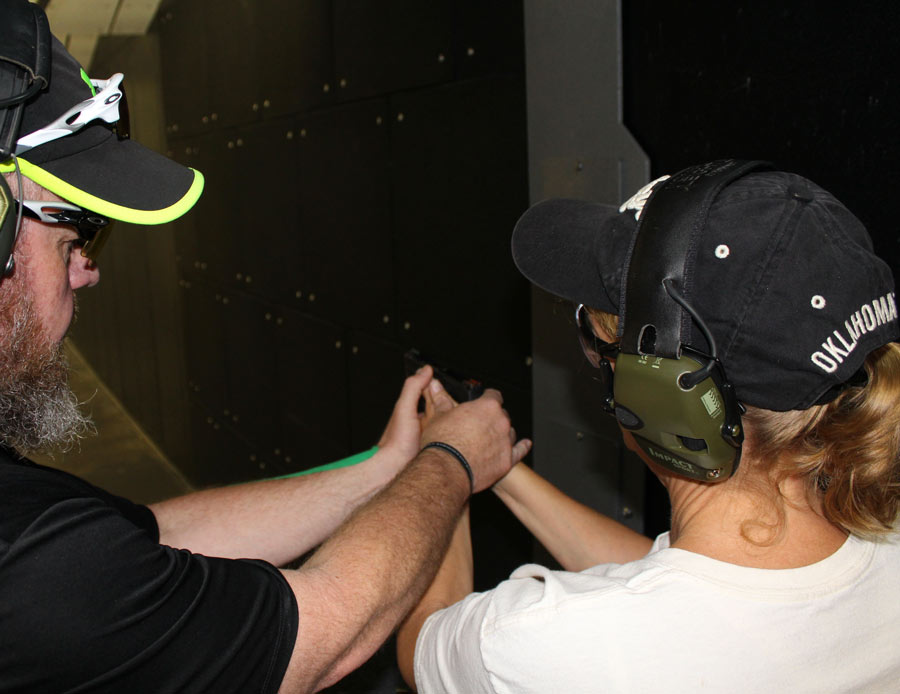 Appendix IWB carry is not for me. In fact, a few years ago I looked upon those who thought otherwise as foolish. Still, there were so many squared-away professionals who carry in the 1 o’clock position, I figured there must be something to it. I went to a four-hour block on Appendix Inside-The-Waistband (IWB) carry at the 2016 Tactical Conference in Memphis taught by fellow Oklahoman and holster maker, Spencer Keepers.

At about the same time, a professional woman I know was seeking an on-body carry solution. She was carrying one pistol in a secret compartment in her vehicle and one in her purse. As we all know off-body carry and keeping a gun in a vehicle are both less than ideal options for a myriad of reasons. Becky is a certified reserve peace officer and at the time, had dozens of hours of documented, quality firearms training including successful completion of Operation Specific Training’s Practical Fundamentals taught by our own Jerry Jones. She’s not someone who spends one weekend a month at a shooting match or top tier defensive school, but she also isn’t a novice. 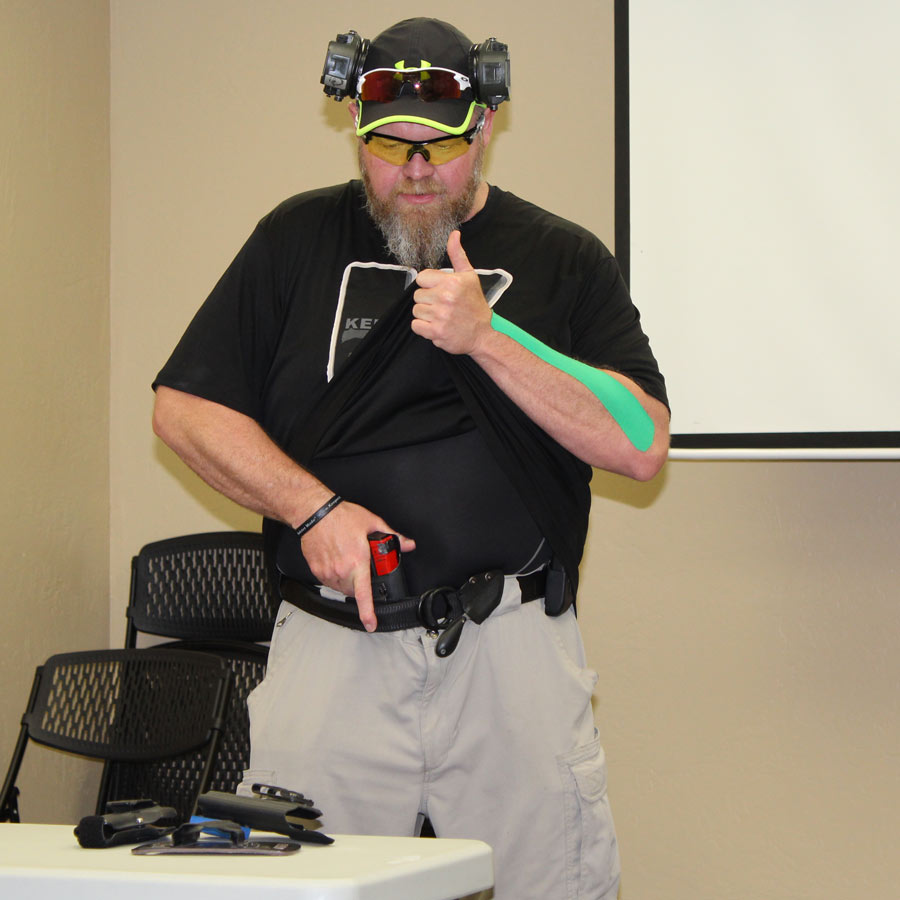 Appendix IWB – Do you know where that thing is pointed?

No discussion of appendix carry can be complete without someone chiming in about the purported lack of safety of this carry method. Properly executed appendix carry is just as safe as strong side carry. In fact, practitioners of Appendix IWB make a very a convincing case that it is actually safer. That may be difficult for some to swallow, but it is consistent with my experience. More to the point, it’s pretty rare to see a strong side carrier holster their gun without muzzling some part of the body.

The same can be said for appendix carry without proper technique. After being trained on both, I can honestly say there should not be “sides” of this issue; only “preferences.” On the Internet, though, ignorance is bliss. It allows for the unnecessary conflict upon which some people thrive. When asked about this stigma, Keepers answered, “institutional inertia.” People are afraid to try anything new or different and they tend toward shunning that which they don’t understand. We’ve all experienced that to some level. 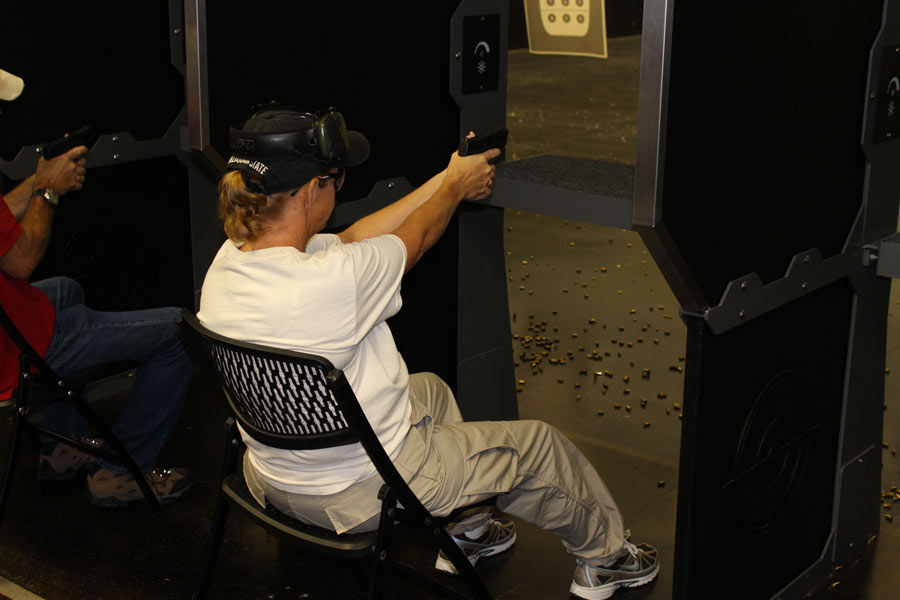 Becky learns to safely draw and holster from a seated position.

Back to the topic at hand, this lady has tried many different modes of on-body carry without success. Women’s clothing typically does not work well with conventional strong side holsters. This issue coupled with the fact that more women are feeling the need to carry a firearm for defense, the fairer sex is increasingly experimenting with Appendix IWB as a carry solution. As with any specific firearm skill, training is a must.

Keepers is not only one of the foremost experts on Appendix IWB, but many of his classes are held about two hours from our town. Spencer has been teaching for several years and has trained with the proverbial, ”who’s who” of firearms instruction. He is a graduate of Tom Given’s Rangemaster Advanced Instructor development program and is one of only eleven Rangemaster Handgun Masters. Considering that Rangemaster has trained tens of thousands of people, that’s more than a little impressive. Becky attended Spencer’s Appendix IWB Skills class to see if it would be the solution she had sought for so long. Becky and Spencer both allowed me to document the event. 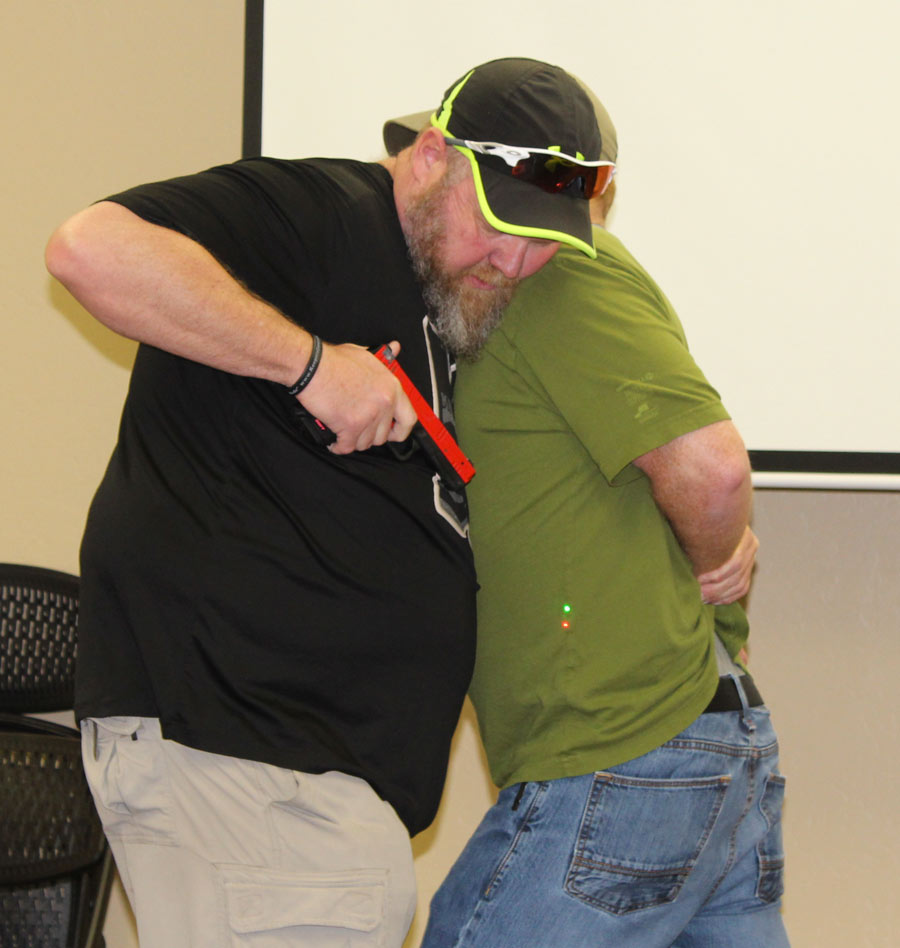 This is much more than an AIWB class. A SIRT training laser pointer was used to simulate a handgun.

In the classroom, Spencer spends a lot of time on range safety and the four basic safety rules. Then, he expands on them. Keepers spoke at length about all of the rules as they apply to dry fire in the home and defensive shootings. After the briefings on safety and procedure, Spencer likes to start the class with a “cold” live-fire timed event. Students draw from Appendix IWB concealed and fire three rounds on target under time and then again at the end of the day to measure improvement.

Then it’s back to the classroom. Keepers covers every conceivable detail about concealed appendix carry, from clothing and belt selection to belt tension, inner garments, etc. Spencer even did blocks on weapon retention and vehicle defense. He is a detail-oriented kind of guy. We’re talking about someone who only chooses screws for his custom holsters which have “micro ridges” on the bearing surface which keep them from backing out during sustained use. His training curriculum is equally well planned.

Another item of note is that the class requires 350 rounds of ammunition. Bring more. Whenever there is an open lane, Spencer encourages what he facetiously refers to as “overachievers” to participate. Becky, being the type to get her money’s worth out of training, shot more than 500 rounds. 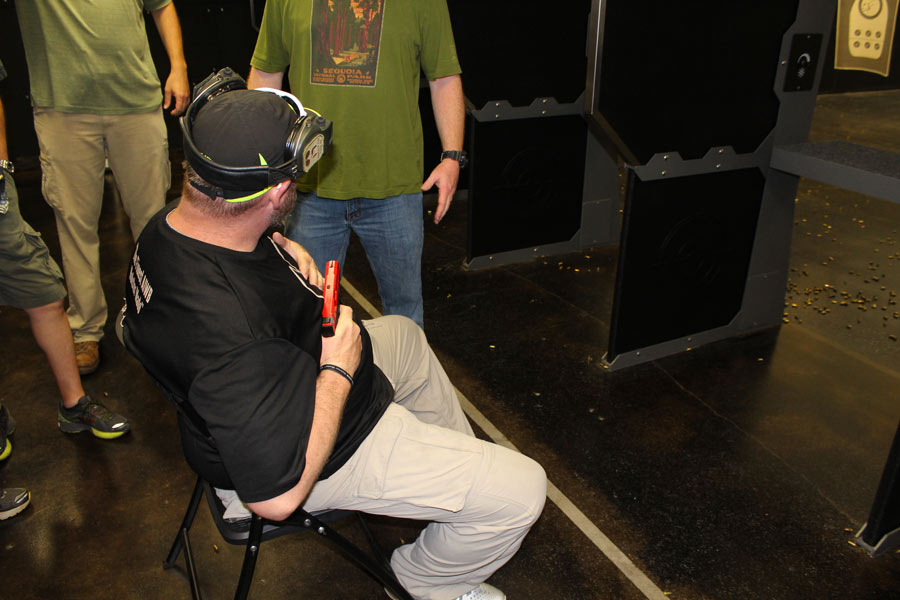 Vehicle defense is an important part of the curriculum.

With a captive audience, a good businessman would pimp his own product. Keeper’s Concealment’s Appendix IWB holsters are considered some of the best available. Instead, Spencer showed us his holsters as well as several from other makers he considers to be of good quality. If you visit Keepers Concealment on the web, you’ll see links to those other holster makers. That doesn’t seem like good business. Apparently, this guy isn’t in it for the money.

As mentioned above, one of the last live-fire drills of the day is to repeat the first. Students draw and fire three rounds under time to measure their progress. The very last drill of the day is to draw and fire one round three times. The goal of the exercise is to give students something to practice on their own. Ken Hackathorn says, “Training teaches you what to practice.”

I talked to Spencer after the class. He told me the goal of Appendix IWB Skills is to “raise the awareness level of appendix carry across the board.” Spencer said his goal is to get people (who want to do so) to carry a gun and to help them carry an effective gun in an effective manner. He has no problem with those who carry strong side as he did so for many years. As a matter of fact, Keepers once looked suspiciously on appendix carry until his friend, the late Todd Louis Green, showed him its benefits. 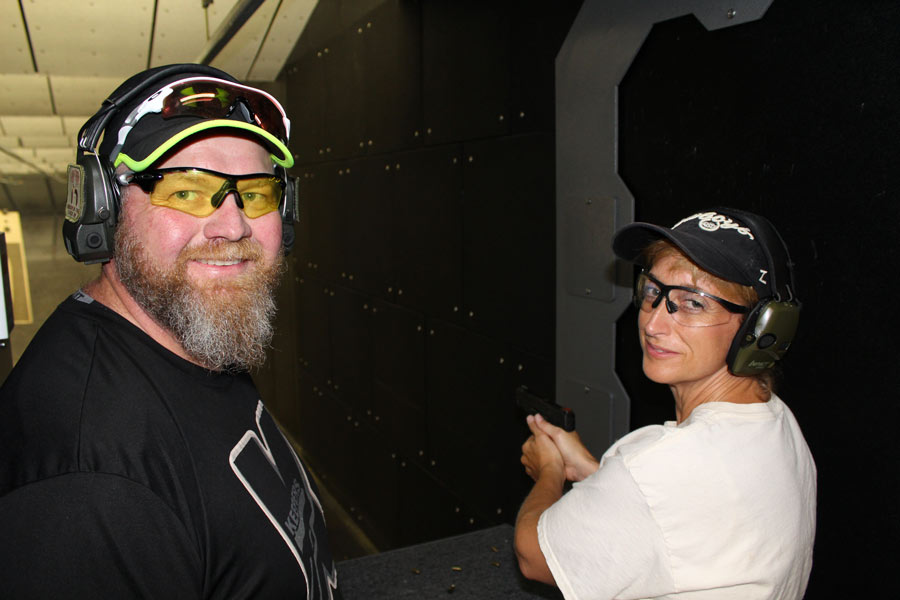 In his closing statement, Keepers said, “you only need to look at the news to see what we are facing out there.” He continued to say that violent threats against innocents are increasing and will likely continue to do so for the foreseeable future. I will add that we once considered mass terrorist attacks a European problem. That is not true anymore. Generally violent crime has been on a steady decline for decades. That was, until 2015. Not only is violent crime suddenly rising, but our very way of life is being threatened.

Back to our heroine: As a business executive, Becky commented on Spencer’s work ethic and passion for the topic. She praised his, “customer service” which is unfortunately something we don’t hear very much in the firearms training industry. Did she solve her on-body carry issue? Did she get the tools she needs to be prepared for whatever future history has in store for us? Watch the video and see what you think. Spencer Keepers teaches often and in many different venues. If you get a chance, take a class from him; especially if you have some questions about Appendix IWB. Wisdom is bliss.

What is Practical Fundamentals?