Dr. William Aprill is one of the leading criminologists in the country.

Skills and knowledge which were once considered peripheral by tactical-type guys are now seeing their rightful place on the front lines of defensive training. For example, the defensive training which I think is more important than any other is (for lack of a better term) criminology.

I recently attended Unthinkable, a criminal mindset program offered by Dr. William Aprill. Dr. Aprill, who insists on being called by his first name, is a mental health professional and experienced former law enforcement officer. He maintains a private practice and through his company, Aprill Risk Consulting and has offered material on violent criminal actors (VCAs) in several high-profile training venues. He’s a competitive shooter and instructor who has been teaching citizens and law enforcement for more than a quarter century. Be sure to check out his many appearances on Ballistic Radio.

Aprill’s Unthinkable curriculum is so titled because most folks are generally averse to truly emotionally immersing themselves in the nature of a VCAs. Normal people just can’t process what happens in a VCA’s mind which allows him (or her) to hurt innocent folks. However, after getting past that emotional hurdle, we can learn how to better protect ourselves in the real world.

Unthinkable allows the student to see the VCA’s victim selection process from an almost uncomfortable, first-person viewpoint. That discomfort is an important part of the learning process. Students need to accept that VCAs do not think like we do. They have extremely different values, morals and goals than productive members of society.

As I looked around the classroom, I knew I wasn’t the only one asking the question. How do we deselect ourselves as potential victims and more importantly how do we not let ourselves be selected in the first place? William answered those questions almost before they could be asked. 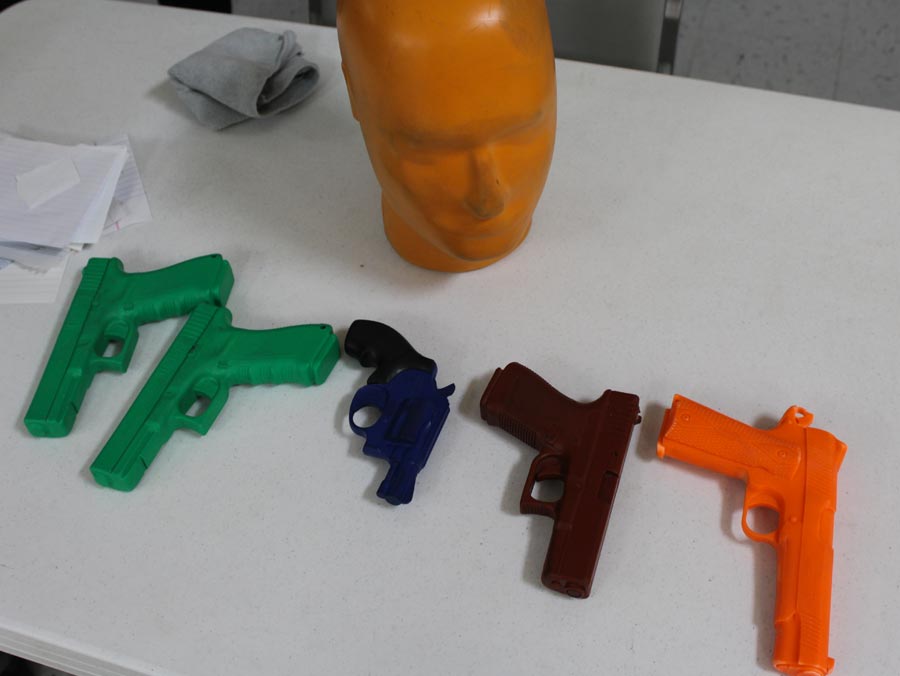 Just after lunch, the class took an unusual turn. There were training simulators (dummy guns) on the table and I was wondering where they would play into a class which has no live fire block. We spent almost two hours practicing weapon disarms. Aprill’s particular disarming technique was new to me, but incredibly effective in its simplicity.

After watching him interact with students, I’m certain that he enjoyed it even more than we did. Instead of the afternoon classroom lag we’ve all experienced, we sat down with smiles and a unique rejuvenation for the remainder of the training day. I asked William if the purpose of that block was to break up the classroom portion by getting people up and moving. He told me that was part of the idea, but there was more to it than just, “classroom management.”  William said the theme of Unthinkable is worst case scenarios. It’s difficult to imagine a worse scenario than facing a VCA with a drawn gun. “It fits,” he said.

At the end of a class, it’s common for the instructor to ask for critiques from students. It’s rare for students to give them. Those critiques are important for the instructor, so they may continually improve their curriculum. The customer is the only one who can truly judge the service they’ve received, but seem loath to do so in a classroom or range environment. William did not ask for verbal critiques. Instead, he asked that everyone write an anonymous note with their thoughts and leave it on the table. I will be shamelessly plagiarizing that idea for my future classes.

Anyone with a modicum of knowledge in self-defense has heard the term, “we default to the lowest level of our training.” Almost every upper-tier instructor has a modified version of that philosophy. Aprill’s is among my favorites. “You will default to the lowest level of training you have mastered.” Most of us have only dipped a toe in the ocean that is the study of criminal behavior. Those who enjoy attending live-fire training also have the desire to never need those skills outside of the square range. Avoidance is an entirely different skill set and requires an entirely different training regimen. I encourage you to seek out that knowledge.