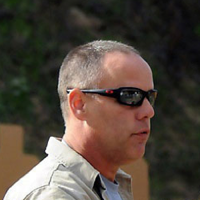 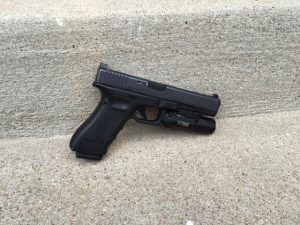 Last week, I was teaching a rifle portion of a training course at my day job. We were at the 200 yard line. During a break in a course of fire, I drew my issued Glock, banged five shots at a chest sized steel plate, and was rewarded with four solid hits that gave that satisfying “CLANG.” The new students were highly impressed, and it bought me a lot of credibility with them.

As most everyone knows, in the last few years I have become all but obsessed with distance shooting with a pistol. By distance I mean absolute accuracy at 50 yards and beyond. As many also know, I sort of claim allegiance being a sponsored shooter to one brand of handgun, but my day job requires use of another brand. It is what it is, front sight, press the trigger to the rear in a straight line.

My latest “Ah HA” moment came in just the last month. I was out in California teaching a class. There was a steel chest plate on the range out at 175 yards. Well, we all know what that means. During the breaks you have to shoot at it. Ray P. and I took turns shooting at it with a borrowed Smith and Wesson M&P9c. I went through a string of hits, but they were hit and miss (literally). Raymond looked at me at one point and said, “Dude, follow through more.” My initial reaction was “My follow through is good enough.” We continued to bang away with it with different pistols. The heavier the gun, the better I did. Hmmmmm.

A couple of weeks later, this bugged me a bit more. I started to notice at 50 yards, my head shots were stringing to the right. My 25 yard head shots were in a nice tight little pile in the middle of the head. One evening, I was talking to Randy Lee, and I mentioned this stringing I was experiencing. Randy made the statement that the lighter the gun the more I needed to follow through. Hmmmm, yet again.

So what is follow through? Follow through is simply defined as the absence of any further input into the gun after the hammer or striker falls. We sometimes train wreck follow through by pushing forward at the wrist at the point of ignition, to what is known as a pre-ignition push. This pre-ignition push will cause a low left hit for a left handed shooter, a low right hit for a left handed shooter. That is the definition. The simple definition is not doing a thing until the bullet leaves the barrel.

I have found that the lighter the handgun, the more I have to follow through at distance. I have to try to watch the front sight completely through recoil instead of just watching the front sight lift from the notch.

Going back to the top…….those five shots at 200 yards. I have put the time in working on my follow through in the last month. It has paid a dividend that is solid marksmanship. Follow through plays a much larger role in marksmanship in general than what most will give it credit for. But in distance shooting, it falls real close behind trigger control in the order of most important to least important.

‘Tis Not Folly to Be Wise: Appendix IWB